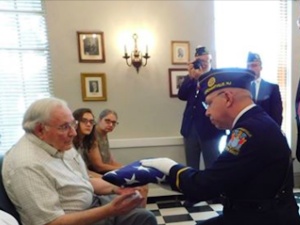 John Brouse, commander of Merchantville's American Legion F.W. Grigg Post 68, presented an American flag to Roger Grigg, nephew of the World War I soldier for whom the post is named, in a ceremony at Borough Hall on August 11, 2019. F.W. Grigg was in the U.S. Army artillery and died on October 12, 1918, during the Meuse-Argonne offensive. Three generations of the Grigg family attended the gathering, which marked the centennial of the post's founding meeting on August 11, 1919. The family heard of their connection to the Merchantville post after the dedication of a street sign honoring Corp. Grigg in May. Roger Grigg is 87 years old, a resident of Toms River, and a retired teacher and school principal. He is a Navy veteran of the Korean conflict. 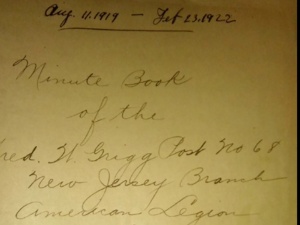