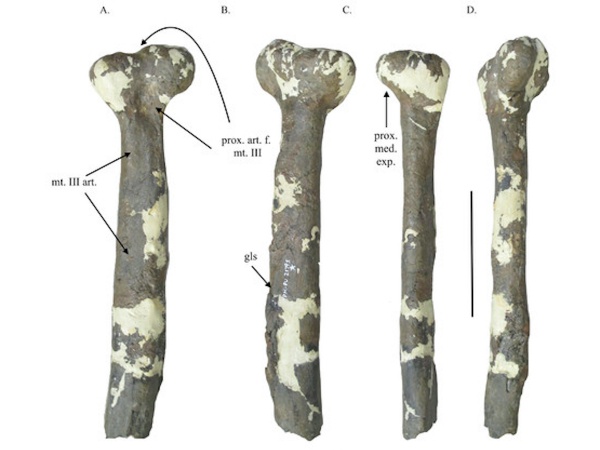 Chase Doran Brownstein from the Department of Ecology and Evolutionary Biology at Yale University and the Stamford Museum and Nature Center has described two new dinosaurs, a herbivorous hadrosaur and a carnivorous tyrannosaur, that lived in the North American paleolandmass Appalachia during the Late Cretaceous epoch, some 85 million years ago. The specimens he examined were collected in the 1970s from the Late Cretaceous Merchantville Formation in New Jersey and Delaware. The remains of the 'Merchantville tyrannosauroid' were re-examined by a team at Yale University, who also analyzed fossils of what is dubbed a new herbivorous duck-billed hadrosaur. The Merchantville Formation, named by Knapp (29) in 1895, is a geological formation - a clayey glauconite sand - in the northeastern United States whose strata date back to the Late Cretaceous, around the time of the Santonian and Campanian age. Dinosaur remains are among the fossils that have been recovered from the formation. In a study of the rocks of Cretaceous age exposed in the banks of the Chesapeake and Delaware Canal in 1954 described the oldest of the marine units as consisting of dark blue to black, micaceous, glauconitic silt and dark greenish-brown, micaceous, glauconitic, very fine quartz sand containing considerable admixtures of silt and clay. This unit, because of its evident similarity to the type material in New Jersey, was called Merchantville and this designation has been used since that time by the Delaware Geological Survey and others.