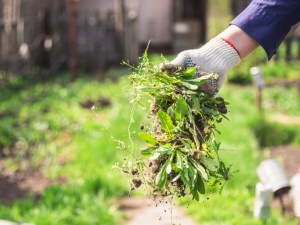 Mother Earth News says, "Two thousand gardeners can’t be wrong — the best tools for keeping ahead of weeds include several types of hoes, a good garden fork, a garden knife, a dandelion puller - some use an old screwdriver or butcher knife instead - and a high-quality pair of gloves." Weeds are an inevitable thorn in every gardener’s side. While some weeds offer benefits, such as the edible greens of young dandelions and the nutritious roots of burdock, many quickly become a frustrating, ongoing struggle if you don’t spot them early. Garden weeds can steal water, sunlight and soil nutrients from food crops, and some even release toxic chemicals into the soil that inhibit the growth of other plants. Gardeners also rated several mulch types and organic herbicides based on their effectiveness in controlling weeds. Paper or newspaper, black plastic and straw or hay proved 70-80% effective as mulch and vinegar, herbicidal soap and Neem oil were the most successful organic herbicides.