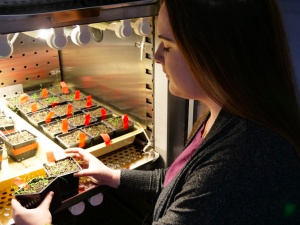 Rutgers University–Camden junior and Merchantville resident, Emily McDermott, is conducting cutting-edge research that could lead to applications for NASA to use in space. A recipient of the NASA NJ Space Grant Consortium, she is working with an assistant professor of chemistry and an assistant professor of biology at Rutgers–Camden conducting research on using plant-based materials to power batteries that astronauts could use in space in the future. McDermott's innovative project aims to find a more eco-friendly way to power batteries instead of using fossil fuels.