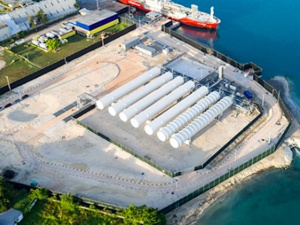 The Borough Council of Merchantville passed a resolution on October 25th opposing a plan by New Fortress Energy to build a massive liquefied natural gas export terminal in Gibbstown, Gloucester County. The Merchantville resolution calls on Governor Murphy to reject permits needed to load highly explosive and polluting LNG onto ships for export out of Gibbstown, and calls on the Army Corps of Engineers to complete an environmental impact statement on the project. This week’s vote is the ninth resolution to pass opposing the project. “Twenty five residents showed up at Merchantville’s October 25th Borough Council meeting to support a resolution put forth by the town’s Green Team in opposition to the New Frontier Energy’s plan to transport massive quantities of LNG via rail and highway in South Jersey,” said Merchantville resident and Green Team member Dorothy Foley, who was one of the seven people who testified in support of the resolution. She added that they were “horrified at the foolhardy and dangerous plan to transport LNG but more than anything…the overall environmental impact of allowing this huge investment in fossil fuel infrastructure at a time when all efforts should be into transitioning away from carbon fuels.” So far, resolutions against the project have passed in Princeton, Pennsauken, Runnemede, Haddon Township, Riverton, Hazlet, Burlington City, and Merchantville.