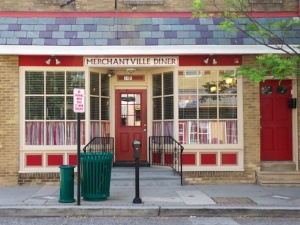 It's going to be a delicious spring in Downtown Merchantville! Two new restaurants will be opening in our the downtown next month. Chef Omega Ellis will bring Omega’s to the McFarlan's Market space, at the corner of Park and N. Centre Streets in the borough. Before becoming the specialty chef at McFarlan's, Omega honed her skills as the store/deli manager at Costa's Market and Corinne’s Place, one of six restaurants in the country to receive the prestigious "America's Classics" award this year from the James Beard Foundation. The Shake Seafood, a fast-casual cajun seafood chain with two Philadelphia locations, will open in the former Merchantville Diner space. Thanks to the Courier-Post in listing Omega's, at 27 S. Centre, and The Shake Seafood, at 24 S. Centre Street, on its up-and-coming restaurant list.